This month’s issue, January 1967, didn’t have a ton of projects I was dedicated to make, but one of the ones I did decide to do was this adorable baby sweater.

Here is a little fact I may have mentioned before, I’m not a sweater maker. I’ve only ever made, and finished, three sweaters before in my life.  I also kinda made a vest. But I really wanted to make this sweater. It had a stitch pattern which adds to my chance of completion, and it is small, which increases my chances even more.

So I started. Since when I picked the yarn I didn’t know who it would be for I picked a nice neutral cream color. Then, by the time I started the project someone announced they were pregnant. Still, cream works for everyone. I had a basic Pound of Love in my stash, and decided to use that. Best feature of this yarn is that it still has several baby sweaters worth of yarn still in the skein. Worst feature, the yarn barf. SO much yarn barf. If you’re unaware, yarn barf is when you go to pull out more yarn from the center and this happens:

I started this sweater last weekend, worked on it a little at a time while watching TV and such, and finished it this weekend!

Here’s my stopping point before sleeves: 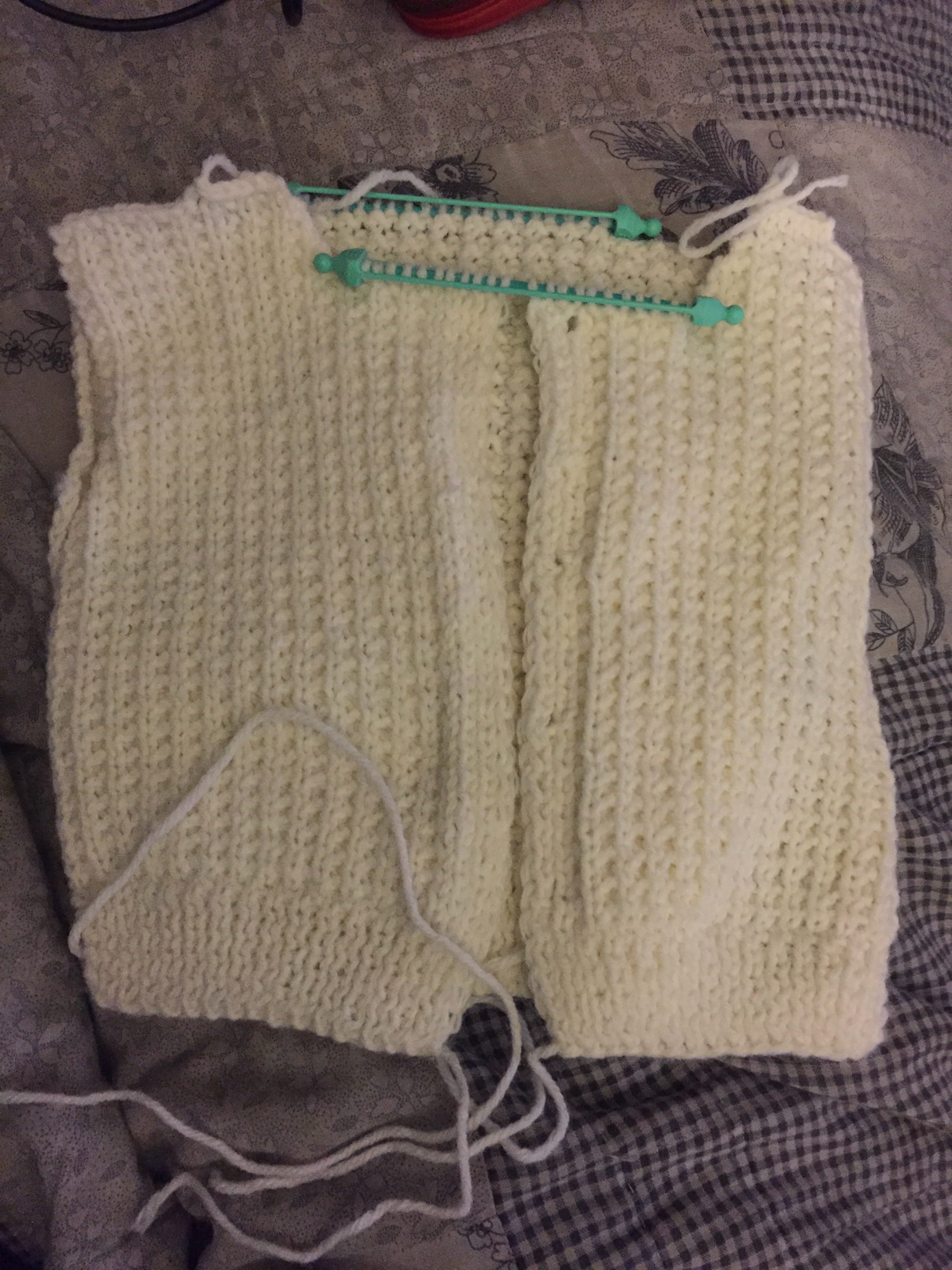 The instructions were all very easy to follow. The stitch pattern was easy but kept it from being tedious, was easy to memorize, and created a really cute pattern. I accidentally messed up the button holes, forgot to start them in the ribbing in the bottom, so I just started them above the ribbing and spaced them evenly.  The sleeves were also very easy. The sleeves were so easy in fact that I managed to knit one with two 9 year old boys in the same room, with both the computer and tv going in addition to the usual racket two 9 year olds make!

After the main sweater was done I had one tiny problem with the neckline. The pattern said to pick up four stitches on each side, and despite all my numbers being right so far, four just wasn’t enough. I needed to pick up six stitches to not have glaring holes. That was the only time in the whole sweater that anything didn’t work exactly as the pattern said.

I have to say, my seams were awesome! I’m not always great at sewing up seams on knit items, but I stood up and cheered after completing this! Here’s to practice!!

It came out adorable! Like a little man sweater, that would also look great on a girl. Just so stinking cute. Makes me wish I was keeping it. I added yellow round buttons instead of the ducks the pattern called for, and I sewed in a little “hand made” label. Sonce drawstrings are avoided on kids clothes these days I didn’t add it, and it really isn’t needed.

I feel like this is a great example of why I love the Workbasket. The patterns are just so timeless. This is a 50 year old pattern that still can be made today. Some magazines had such fads that the only real value is laughs, but not the Workbasket!

I’m very proud of this sweater. I really feel like if you picked it up you would think it was from a fancy baby store, and not handmade with stashed mass market acrylic yarn. The time it took to make was great too! You could start upon receiving a baby shower invitation and have it done in time for the shower!

I know I’ve seen this stitch pattern before, and thought maybe it was a seed rib stitch, but it isn’t. I can’t remember the name of it correctly, and if I figure it out I’ll let you know, but here is the very simple stitch pattern:

2. Knit one purl one across row.

Repeat one and two.

The back side creates a gentle nubby fabric that would be great for washclothes and dishclothes. Or two layers thick would be a great hot pad!

And now that this sweater is done I’m already on to the next project! Crochet hook in hand and working on a hot pad!

One of my favorite goofy finds is this "world's sm

Good thing I'm better at cooking than I am at food

I worked my handmade cones of vintage music into t

Still need to do actual shop photos before I list

I went on a bit of a doll binge this week. Three n

My family needed a pick-me-up, so I bought us a sm

Just another view to show her fun and flirty eyes.

She still needs some more cleaning but I got someo

I got hats... They're multiplying!! And I'm losing

Another sneak peek! Something is multiplying in my

You know what makes you feel old? I was so sore af

Why yes, I DID get a box full of green stuff!! Get

Starting a new book. The title makes me feel a lit

Cranking out some new products! This is the protot

If you're a coffee person and haven't tried this b

While I was sitting and working with the baby, the

Celebrating #caturday with #kismetthecat Yes, he i

Got some new #wallart today too! #funfinds #vintag